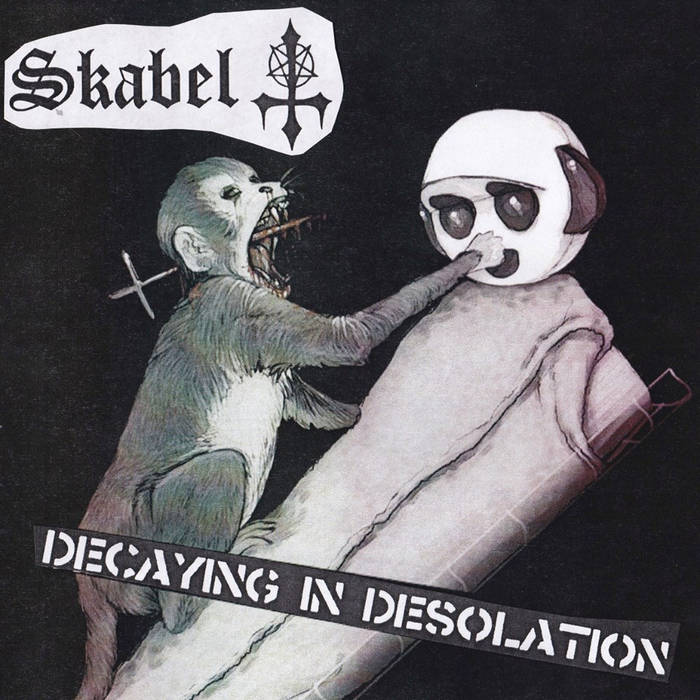 When asked to review Skabel's new album, "Decaying in Desolation," I was not sure if I could manage to survive a second round of this auditory vomit. Well, being in something of a masochistic mood, I decided to give it a shot. I will admit, I was rather surprised by this latest bit of nonsense. This sophomore album, like their first ("Three Blind Mice"), requires a certain sort of taste, when it comes to listening to music. Unfortunately, I acquired that taste, quite a few years ago.

Amongst the shouting, the social discontent, the profanity, and the upstrokes, we find more annoying angst-ridden music, touching - as is Skabel's style - on religion, drugs, social issues, politics, and life (in general); even with a few shockingly positive messages, especially in the last song, "Raise Your Flag."

Though this style of music - this acoustic folk-punk, of sorts - is not the best style to waltz to, I found myself listening to the album, time and time again, as I went about my days. I would certainly recommend that people take a gander - if you will - at the album, and actually pay attention to the lyrics, if you can find a way to understand them. Like with Skabel's other work, the lyrics are intelligent, button-pushing, and rather well written.

All vocals are done by Skabel (except for the featured addition of soundbites and Thqmas Insomnia).

All instruments were performed by Skabel except for violin which is played by Kyle Duncan.

All lyrics and musical content were composed by Skabel. Quotes are credited by Eiichiro Oda.